Now that we understand progressions and how they move based off the chart, we can build chords instead of single notes at each position. A chord is a combination of notes that harmonize together. When notes are played in certain combinations, they create more complex wavelengths. The interesting part about this, is that certain chords have the same wavelength of specific emotional vocal patterns. And when people display emotions, people subconsciously pick up on them and feel them. That’s just human psychology. If I were to play a Dm6, it would invoke a sad emotion and if I were to play Cmaj, it would invoke a happy good feeling. That’s because those wavelengths mimic the tonal quality of those emotions. 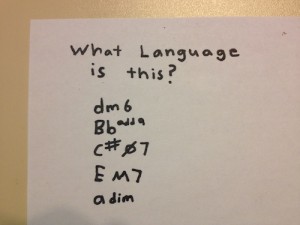 There are only about 10 standard chords but in this lesson, I’m going to teach only the basic four. Chords may look different on the keyboard depending on where they were built but if you count the keys from the root, you’ll find that every chord type is the same. What makes a chord is making sure all the required keys are played, but they can be played in almost any order you want. Which is why there are over 100,000 chords. They are the same chords, they’re just inverted.

Structure of a Chord

A basic chord is constructed of three main parts: Root, 3rd, and 5th. Think of the root as the foundation as well as the name of the chord. Think of the 3rd as his right hand man, he’s going to really sway how the root feels, whether that be happy, sad, or etc. And finally the 5th, which is the root’s opposite. 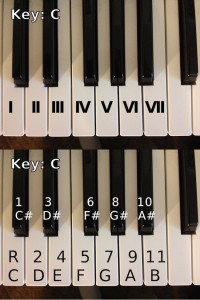 A chord starts on it’s root, labeled “R”. The Root is determined by which Roman Numeral your currently on in the Chord Progression. We are going to start from the root on Roman Numeral ‘I’ and use both the black & the white keys. Start on C, then label every black & white key in order until you reach eleven. Because note #12 should be C of the next repeating section as Roman Numeral ‘I’.

Now just hold down all the numbers associated with the chord, on the keyboard. And there you have it.

That leads us to our four main chords: 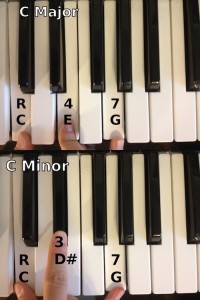 Major is your most common chord; It’s the bulk of the song, or main course of dinner. It has the feeling of being happy. Most songs, meaning over 90%, use this chord somewhere in their song. Does this mean a song can’t be written without it? No, but it’s uncommon to find any like that. The next most common chord is the minor chord. It has a feeling of sadness.

Both of these two chords are determined by their 3rd. Now this is enough music knowledge to be off writing amazing songs, since most songs only ever use Major & Minor Chords. But if you want to see how deep the rabbit hole really goes and learn about tonal psychology, keep reading. lol 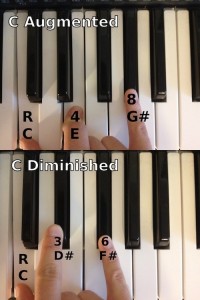 The next two chords, Augmented & Diminished, aren’t used as much as Major & Minor, but do show up quite occasionally. If you think of Major & Minor as Left & Right, think of Augmented & Diminished as Up & Down. Aug being up and Dim being down. These two chords are mainly determined by it’s 5th. If you listen and compare the two, you’ll find that the Aug feels open, free, & floating; while the Dim feels evil & squished.

Practice those four chords. For more explanation with step by step instructional visuals, check out this page. See ya next week!