The notes on the guitar are laid out in an interesting way. The way that it is set up, you can find the next root position in the progression very quickly. No matter where you are on the fretboard, this pattern is consistent except between G and B. As mentioned in the previous lesson, the distance between string G and B is a minor third instead of a forth like all the other strings. This method of finding the next root note in the progression works especially well for solos on a guitar or rhythm on a bass guitar.

Guitar solos are essentially fancy scales played quickly along a progression. When playing a solo, you want to express your creative freedom by playing all over the fretboard. If you haven’t learned all your scales yet, which I highly recommend you do, this method will show you all the notes that will harmonize with the note you are currently on. 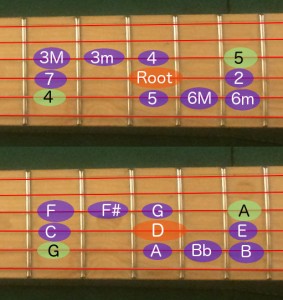 Now something interesting is if you turn this graph upside down, the shape is exactly the same. It’s almost as if major and minor are inverses of each other.

If you’ve ever played on a guitar, you’ve probably heard of a power chord before. It’s a cheap, simple, easy, and effective way to play harmonizing notes. They sound good but lack substance and intricacy. If you break a power chord down to individual notes, it contains a root, a 5th, and the same root one octave higher. Because it contains no 3rds, it can be played just about anywhere in any scale. 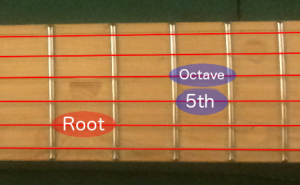 Here are a few common chords on the guitar with each note and its classification: 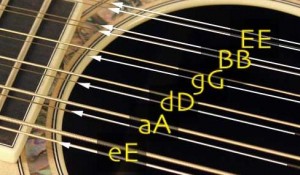 Playing the same note in a different octave gives a richer and fuller sound than just playing it in one octave alone. A great example of harmonizing octaves is the way a twelve string guitar is set up. Even though a twelve string guitar has twice as many strings of a standard, it’s not introducing any new notes. It not only contains all the basic strings of a standard guitar, but also pairs up with a second set of strings one octave higher. It’s very easy to play the pair together because they are so physically close to the basic ones that they are practically touching. When playing a full chord on a twelve string, your essentially playing four roots, four 5ths, and many 3rds. Your playing every note within the chord across the tonal spectrum in multiple octaves. It doesn’t get any more rich and full than that.

What interesting patterns have you found? Tell me in the comments below!