In the previous lessons, I taught music theory on a piano. Due to high demand, I’m going to teach the same theory on a guitar and bass guitar as well. The theory is the same no matter which instrument you play it on, but the way the notes are laid out are completely different. Even though the theory itself is the same, learning music theory across multiple instruments helps you understand and grasp the knowledge in different ways. 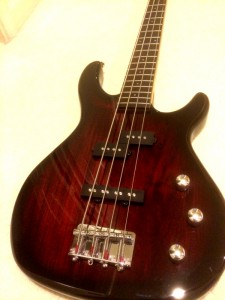 On a piano, the notes are laid out in a straight line from lowest pitch to highest pitch. The white keys represent the whole notes, while the dark keys represent the half steps, or sharps and flats. Personally I find the piano easier to play than the guitar because the notes are all there in a line and easy to reach. Guitar requires very precise finger positions across six strings. I played the viola for over six years and I still find the guitar harder. Four strings is an amount I feel more comfortable with.

Guitar’s scales start on the thickest string and move toward the thinner strings, higher in pitch. I’m going to refer to the thickest string as string one, and the thinnest string as number six. This might be backwards from the traditional way, but I think of my strings in the order I see them, from closest to farthest from me. The six strings are: E, A, D, G, B, and E. Every fret is an incrementing note in the scale. On fret twelve, the scale repeats because there are only twelve notes in a scale. On string two, the scale picks up from fret five on string number one. Fret five will always be the string above it, except for one spot.

Something strange happens between string four and five, or the B and G string. Instead of string five picking up from string four’s fifth fret, it picks up from fret four instead. It’s like the scale shifts down half a step. If you look at the image of Circle of Fifths, each string moves counter clockwise up a forth for the first four strings. String five jumps to the note before the starting note and string six is the starting note, two octaves higher. Why no C string and F string? When taking a closer look, the strings follow the same pattern on the circle until it reaches a note that has a relative major or minor already used. The strings start on E and keep moving until G. G’s relative minor is E. The notes repeat within this region instead of continuing the pattern. 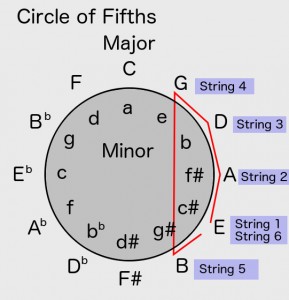 There is a lot of speculation as to why the guitar standard tuning is the way it is. Every string is a perfect fourth higher than the last, except for between G and B, which is a minor third instead. Comparing the guitar to a violin or cello, the tuning is slightly different. Violin and cellos are tuned by perfect fifths, which gives the widest spectrum when playing the fretboard. Guitars are played in a different position which makes it difficult to spread your fingers the full scale. To make the guitar a more comfortable instrument to play, it was tuned by fourths instead.

Another thing to take note are the dots on the fretboard. They aren’t there for just decoration. They not only orient yourself on the fretboard, but they mark very useful milestones in relation to the open string. While I find the markers way more useful on a bass guitar, they are still quite helpful on a regular guitar.

This was just an intro post with my analysis of comparing guitar and piano. In the upcoming lessons, I’m going to show common chord positions, a neat graph to move progressions, and other peculiar patterns I have noticed.

What interesting patterns have you found? Tell me in the comments below!