Last time we learned 9th Chords. Now that we’ve reached lesson #6, we’re going to cover 6th chords. These are very interesting chords because they add some color to your progression. They give your progression something different without pushing it’s limits and keeping a stable chord. These are great and create very diverse tones depending on it’s surrounding chords. I’m starting to use them a lot in my music. Let’s start building our chords! 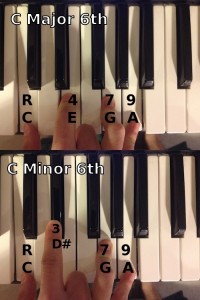 These create a very colorful happy feeling. Its used to add some color and widen the pallet. It’s also great for smoothening transitions between chords, by having a stable chord with one more note in common with the next chord. If you actually look closer at a Major 6th, you’ll notice that it’s a Minor Seventh Chord in disguise. Because of this, it can easily be substituted. (e.g.: If your playing a C6, it could also be interpreted as Am; G6 can also be Em.) So basically a Major 6th is a Minor Seventh Chord.

These are the mysterious chord. When played, it creates a feeling of strangeness. It isn’t necessarily a bad feeling, it just feels different and like its floating. These are best used as a dramatic pause. When you play them, drag them out and it will really grab the listener’s attention.

An example of this chord in use, is a Cinematic Instrumental called, Party Cloudy, by JeFF ZaBorski.